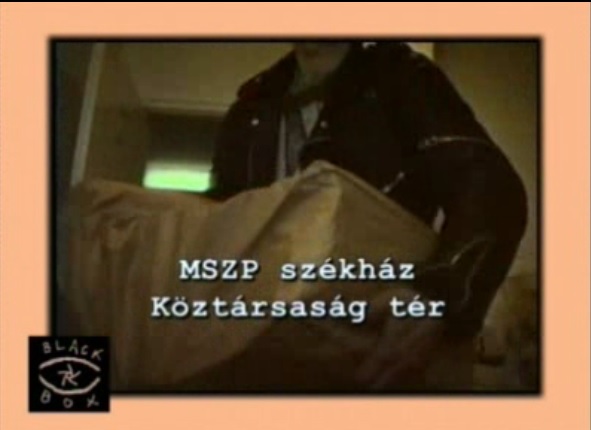 The 34-minute long documentary film ‘Danube-gate’ by Black Box is an event tracking documentation of the secret spying scandal that exploded in Hungary in January 1990. Police Major József Végvári, an active member of the infamous III/3 secret department, in late 1989 called on the cameraman of Black Box to help to reveal the fact that months before the free elections, the ex-communist ruling party, renamed MSZP, was still surveilling the activists of the democratic opposition, just as it did for several prior decades.

In one of her interviews, Márta Elbert recalled her memories about the discovery and its effects: “In January, with the Danube-gate scandal exploding because of our recordings, we practically managed to remove the Interior Minister from his position. In our days, the activities of Department III/3 of the Hungarian secret police were well known. However, at that time no one had any idea about its staff, and how it worked in secret operations; it was our film ‘Danube-gate’ that shed light on these aspects for the first time, informing a wider public. It is no wonder then that these revelatory shots immediately made Black Box known and esteemed not only in Hungary, but also abroad, as the world’s major TV companies tried to come in contact with us. […] Nowadays, in the media, spectacular expositions follow each other at such speed that they often extinguish each other’s effect. But at that time it was different. And just a few months before the first free elections, it was really shocking for most of the public to be informed that the secret police went on surveilling the democratic opposition in much the same way as it had been doing before, although the National Roundtable Negotiations of 1989 concluded in an agreement between the ruling communist party and the opposition to stop all those antidemocratic secret operations. In fact, the Danube-gate scandal set off by our film was the very first case that publicly identified by face and name those hidden and high-ranking apparatchiks who were in charge of operating the secret spying and reporting system in Hungary.”