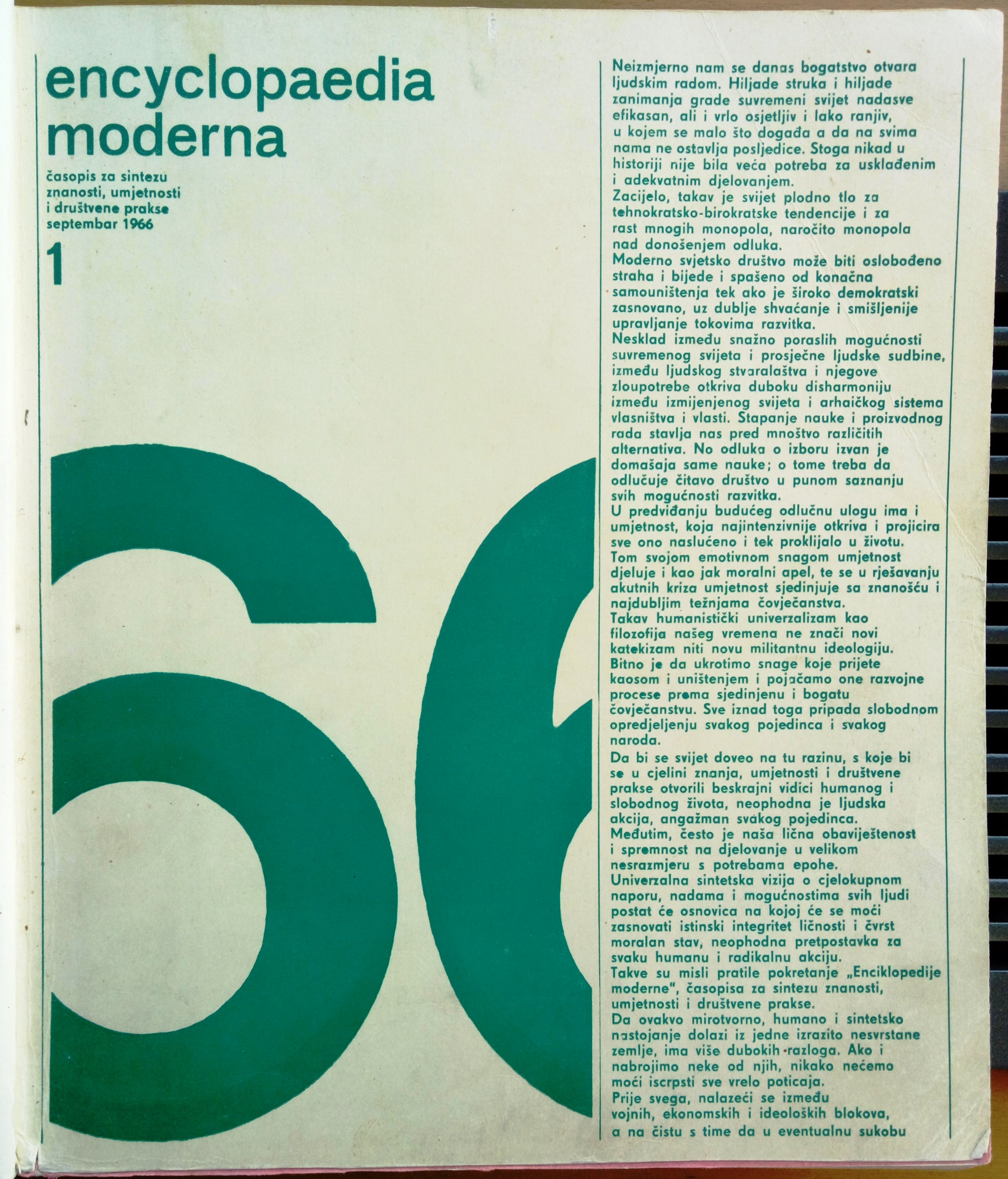 Croatian scholars made important contributions to the work of the Pugwash Movement by gathering primarily around the Institute for the Philosophy of Science and Peace of the Yugoslav (after 1991 Croatian) Academy of Sciences and Arts (JAZU/HAZU). In 1966, a group of Croatian intellectuals from the Institute, led by Ivan Supek, in 1966 launched the journal Encyclopaedia moderna: časopis za sintezu znanosti, umjetnosti i društvene prakse. It was published in all Yugoslav languages and dialects, but there were also articles in English. In addition to the central editorial office in Zagreb, it had editorial staffs in Belgrade, Ljubljana, Sarajevo, Skopje and Titograd. It was issued quarterly, although occasionally deviated from this schedule. The editor in chief was Ivan Supek (except in 1975, when the editor was Eugen Pusić). Since the mid-1980s, Supek was assisted by Nikola Zovko and Bojan Marotti (interview with Marotti, Bojan).

As a multidisciplinary journal, it promoted universalism and a humanistic orientation for science and the arts, as well as the complete disarmament and the creation of world peace. The first issue began with the “A Word from the Editors,” in which they stress: “we stand between military, economic and ideological blocs, and it is clear that in the event of a [global] conflict there can be no victory, but only a general disaster” (p. 1). They insisted on the universality of humankind: “Although the world is so fatally disunited, in every corner of it peaceful, humane and progressive thought is smouldering" (p. 3).

The goals of the journal were almost identical to the goals of the Pugwash Movement, and Supek insisted that every issue must contain something about the movement. “Pugwash” or “Peace Studies” or some column with a similar name was published in almost every issue. It would usually convey information, documents, declarations, or reports from Pugwash Conferences and other meetings. All of the contributions in the column were in English, in attempt to make the journal accessible to international scientific currents.

In the 1960s, Encyclopaedia moderna was relatively popular due to the prominent intellectuals who contributed articles to it. The journal strived for academic freedom and was even open to topics that the communist government considered undesirable, as was the case with religion (Kolarić 1973). The Yugoslav communist authorities did not like such intellectual independence, and the government reduced the funding for all of Yugoslavia's Pugwash organisations and publications. In 1976, Encyclopaedia moderna was forced to shut down because the government completely severed its funding (Knapp 2013, 99). In the 1980s, the very existence of the Pugwash organisation in Yugoslavia was questionable, mainly because Supek was out of favour with the communist regime. Still, the movement survived those trying years.

The journal was re-launched after the fall of communism in 1991, with Nikola Zovko as editor-in-chief, but its scope was oriented more towards Central Europe. It was published until 1998, and Marotti believes the journal was "naturally extinguished" because the themes of the journal were no longer as current as during the Cold War (interview with Marotti, Bojan).