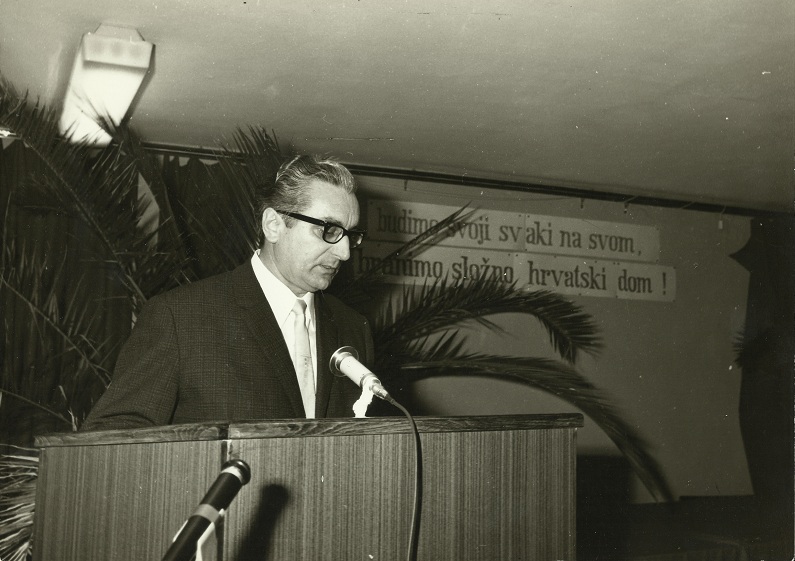 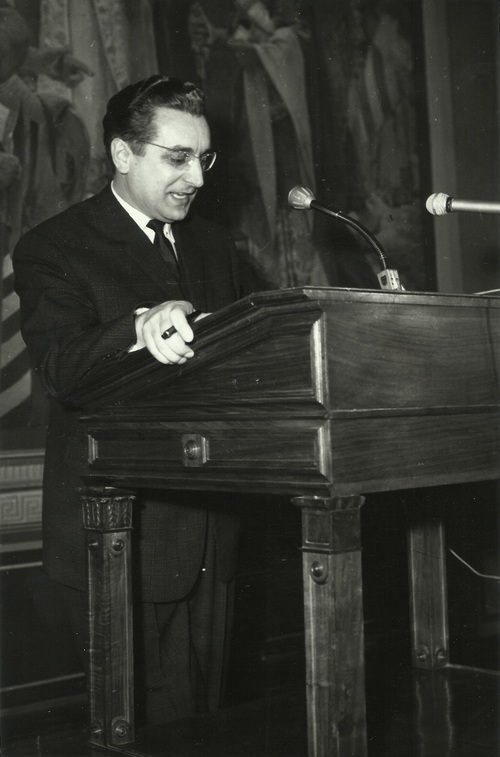 Franjo Tuđman was born in Veliko Trgovišće, a village in the Hrvatsko Zagorje region, on 14 May 1922. He attended primary school in his hometown, and then secondary school and the commercial academy in Zagreb, where he participated in the national anti-monarchist democratic movement, for which he was arrested twice in 1940. During the Second World War in Yugoslavia, he participated in the antifascist Partisan movement in north-western Croatia. At the beginning of 1942, he became a member of the Communist Party of Yugoslavia, and by the end of the war, he advanced in the military hierarchy to the rank of major. At the beginning of 1945, he moved to Belgrade as one of the Croatian representatives in the General Staff of the National Liberation Army and the Partisan Contingents of Yugoslavia. Later, he had other duties in the Yugoslav People’s Army, and also was a member of the editorial board of the Military Encyclopaedia (http://www.tudjman.hr/zivotopis/).

In Belgrade in 1957, he completed his studies at the High Military Academy. In the same year, he published his book on military history and theory, Rat protiv rata. Partizanski rat u prošlosti i budućnosti (The war against war: the Partisan war in the past and future) (Tuđman 1957). In 1960, he was promoted to the rank of general, after which he left active military service and devoted himself to scholarly research, primary in the field of history, military theory, contemporary national history, philosophy of the history and international relations. Soon he returned to Zagreb and in 1961, with the support of the leadership of the League of Communists of Croatia Communist Union, was appointed the first director of the newly-established Institute of the History of the Labour Movement of Croatia (today’s the Croatian Institute of History) (Kolar Dimitrijević 2011). As of 1963, he taught at the Faculty of Political Science of the University of Zagreb. He defended his doctoral thesis in 1965 at the Faculty of Humanities and Social Science in Zadar (“Causes of the Crisis of Monarchist Yugoslavia from unification in 1918 until its collapse in 1941.”

Due to his views on certain historical issues, he came into conflict with the communist authorities, who accused him of being non-Marxist and nationalistic in his research work. This primarily pertained to his struggle against manipulations regarding the number of victims of the Jasenovac concentration camp, his attitude that each nation in the Yugoslav federal state was entitled to their own armed forces, and his opposition to the imposition of collective guilt on the Croatian people due of the creation of the Independent State of Croatia during World War II. He was a member of the managing bodies of the Emigrant Foundation of Croatia (1964-1968), and, during his research in the United States in 1966, he established close relations with Croatian intellectuals there. Although he was not a signatory to the 1967 Declaration on the Name and Status of the Croatian Literary Language, he faced political consequences due to suspicion that he was one of the Croatian intellectuals who created the atmosphere for the Declaration’s appearance. The Party (League of Communists) accused him of poor management of the Institute, and he was forced to resign and retire. He was expelled from the Party primarily because his views on recent national history were characterized as opposed to those of the League of Communists (Čepo 1982, 26).

Despite expulsion from the Party, a period of his very intense scholarly activity began. He focused on issues of Croatian history and reality, which served as a preparation for his later political action. Tuđman's scholarly work resulted in the book Velike ideje i mali narodi (Grand ideas and small nations) (Tuđman 1969), which examined the role of small peoples in history and their right to self-determination. For Tuđman, the right to self-determination did not conflict with the possibilities for international integration such as the European Community of the time. Promoting the peaceful coexistence of sovereign nation-states (including a united Germany), he also disagreed with the high-state misuse of socialist internationalism (Hameršak 2016).

In 1970 he became a member of the Association of Croatian Writers, a member of the Steering Committee of Matica hrvatska and, as of 1971, the president of Matica hrvatska’s Commission on Croatian History. During the Croatian Spring, he lectured and wrote about the necessity of “Croatian state sovereignty” in numerous journals and also participated in the debate on amendments to the Constitution of the Socialist Republic of Croatia. After the quelling of the Croatian Spring, he was arrested in January 1972 and sentenced to two years of harsh imprisonment and banned from public activities for two years, while his military rank was stripped and his passport seized. The verdict fully endorsed the accusations levelled in the indictment, which stated that Tuđman wanted to overthrow the socialist system in Yugoslavia with the aim of creating an independent Croatia with a capitalist system through his involvement in Matica hrvatska and by fostering ties with Croatian political émigrés and foreign countries. His punishment was reduced to nine months in 1973 (Vuković 2004).

Although he was banned from public activity, he continued to maintain ties with dissidents in Yugoslavia and beyond. After serving his prison sentences, he began to intimately associate with other intellectuals who had also suffered consequences after the crushing of the Croatian Spring, primarily members of Matica hrvatska and the leaders of the defeated liberal wing of the League of Communists of Croatia – Miko Tripalo and Savka Dabčević Kučar. Tuđman also formed ties with political émigrés, with whom he met in Austria, the Federal Republic of Germany and Sweden in 1977, illegally crossing the Yugoslav border (Manolić 2016, 140-147). He wrote that the democratisation of political life and a genuine democratic agreement among the Yugoslav peoples were the only solution to the crisis in the SFRY. He furthermore advocated the "Scandinavization" of Yugoslavia, recalling that the conditions for lasting peace and harmonious coexistence of the Scandinavian nations were created only after all forms of Scandinavian unions with Danish or Swedish hegemony had been eliminated and independent nation states had been established (Tuđman 1981c).

Due to his conversations and interviews with journalists from Western European media, in which he criticised the communist monopoly and advocated a multiparty democracy, he was again prosecuted. In 1981, he was arrested and sentenced to three years in prison, with a five-year ban on any public activity. He was convicted of repeatedly disseminating falsehoods in conversations with foreign journalists, and thus, given the external element, committing the criminal offence of enemy propaganda (Tuđman 2011c, 99). The media in Yugoslavia were strictly controlled, and the regime had done everything to prevent contacts between foreign journalists and Yugoslav dissidents. Foreign journalists who talked to Tuđman in the 1980s were detained at the border, their materials were seized, and they were expelled from Yugoslavia. However, it was impossible to stop the distribution of Tuđman's closing arguments from his trial in 1981. Tuđman defended himself by presenting data that had shaken certain dogmas of Yugoslav communist society and which demonstrated the unfavourable status of the Croatian people in the SFRY. His final word in court was photocopied and distributed hand to hand, not only in Croatia but also in the émigré communities, in which several "wild" editions were soon published (Tuđman 1981, Tuđman 1981b, Tuđman 1981d).

Tuđman served a sentence in the Lepoglava penitentiary from January 1982 to February 1983, but due to severe health problems, he was temporarily released. He returned to serve his sentence in May 1984, but after several months the Supreme Court released him conditionally due to his health.

When his passport was restored in 1987, he travelled to Canada, then to the United States, Germany, Sweden and Austria, meeting with Croatian émigrés to spread and promote his ideas about national reconciliation between the Croatian right and left, that is, about the unity of the Croatian people and the creation of a Croatian national democratic movement. By gathering like-minded individuals, he soon drafted his political platform, focusing on the creation of a sovereign democratic Croatian state. Since 1989 political pluralism was allowed in Yugoslavia, and at the forum of the Association of Croatian Writers in Zagreb, Tuđman unveiled his initiative to create a democratic party, which he founded in June 1989 (the Croatian Democratic Union) and served as its elected chairman (Knežević 2015). After the first democratic elections in 1990 and the victory of the Croatian Democratic Union in Parliament, on May 30, he was declared President of the Presidency of the Republic of Croatia.

In the Republic of Croatia, he won presidential elections twice (in 1992 and 1997). However, assessments of the character of his governing style are ambivalent and cover a broad spectrum, ranging from those who see him as a "founding father of the homeland" to those who see him as an authoritarian ruler.

Under his leadership, the Republic of Croatia was internationally recognized and defended its territorial integrity during the Croatian War of Independence. In 1995, he participated in the peace conference on Bosnia and Herzegovina and was a signatory to the Dayton Accords. His presidential term in office, during which Croatia fought the war for its independence, he governed with a firm hand, which is why he faced much criticism. A part of the Croatian public labelled him an authoritarian nationalist leader, and even compared him to Slobodan Milošević (Hameršak 2016). His policy toward Bosnia and Herzegovina is one of the most controversial areas of his political biography. There are claims that Tuđman, together with Slobodan Milošević, wanted to partition the territory of Bosnia and Herzegovina. Moreover, after Tuđman’s death, Carla del Ponte, the new prosecutor of the International Criminal Tribunal for the former Yugoslavia (ICTY), said that she would have indicted Tuđman had he not died in 1999 (http://edition.cnn.com/TRANSCRIPTS/0104/27/i_ins.00.html). Debates on Tuđman’s presidential tenure and his role in the war in Bosnia and Herzegovina are still ongoing in recent Croatian historiography (See Goldstein 2004; Sadkovich, 2006; Banac 2010; Lučić, 2010).

As mentioned previously, Franjo Tuđman fostered intense oppositional activity in the period of socialism. It began in the sphere of historical scholarship and culture and developed into the most potent political opposition to the then communist regime. He was particularly critical of academic historiography, which, in his opinion, rarely dared to step out from the framework of the "political correctness," that is, the postulates of the ruling ideology. Although he based his views on official documents and credible sources, he was tried and sentenced twice. On 4 June 1982, he wrote in his diary: "I still have the consolation that in wrestling with muddled misapprehensions, in the end, I paid for breaking the 'black legend' that, in proportion, the greatest crimes in World War II had been perpetrated on the Croatian soil" (Tuđman 2011b).

Franjo Tuđman suffered consequences for his attitudes and views, which later became his political platform. He began with different views and interpretations of certain historical themes, diverging from mainstream history and historians. When he was expelled from the communist organisation, he gradually abandoned the Marxist ideology and turned to the principles of pluralism and democracy. This evolutionary process of Tuđman's thought can also be seen on the pages of his diary. The arguments with which he defended his attitudes quickly spread through illegal channels across the country and abroad and later became the basis of his political platform, with which he won the first free multi-party elections in Croatia.

He died in Zagreb on 10 December 1999 and was buried at Zagreb's Mirogoj Cemetery. Currently, he is mostly remembered by the Croatian public as a stern and charismatic personality, a man who deserves the most credit for Croatia gaining its independence. The newly reconstructed Zagreb airport was named after him in 2016.

Tuđman, Franjo. 1957. Rat protiv rata. Partizanski rat u prošlosti i budućnosti (War against the war: Partisan war in the past and the future). Zagreb: Zora.