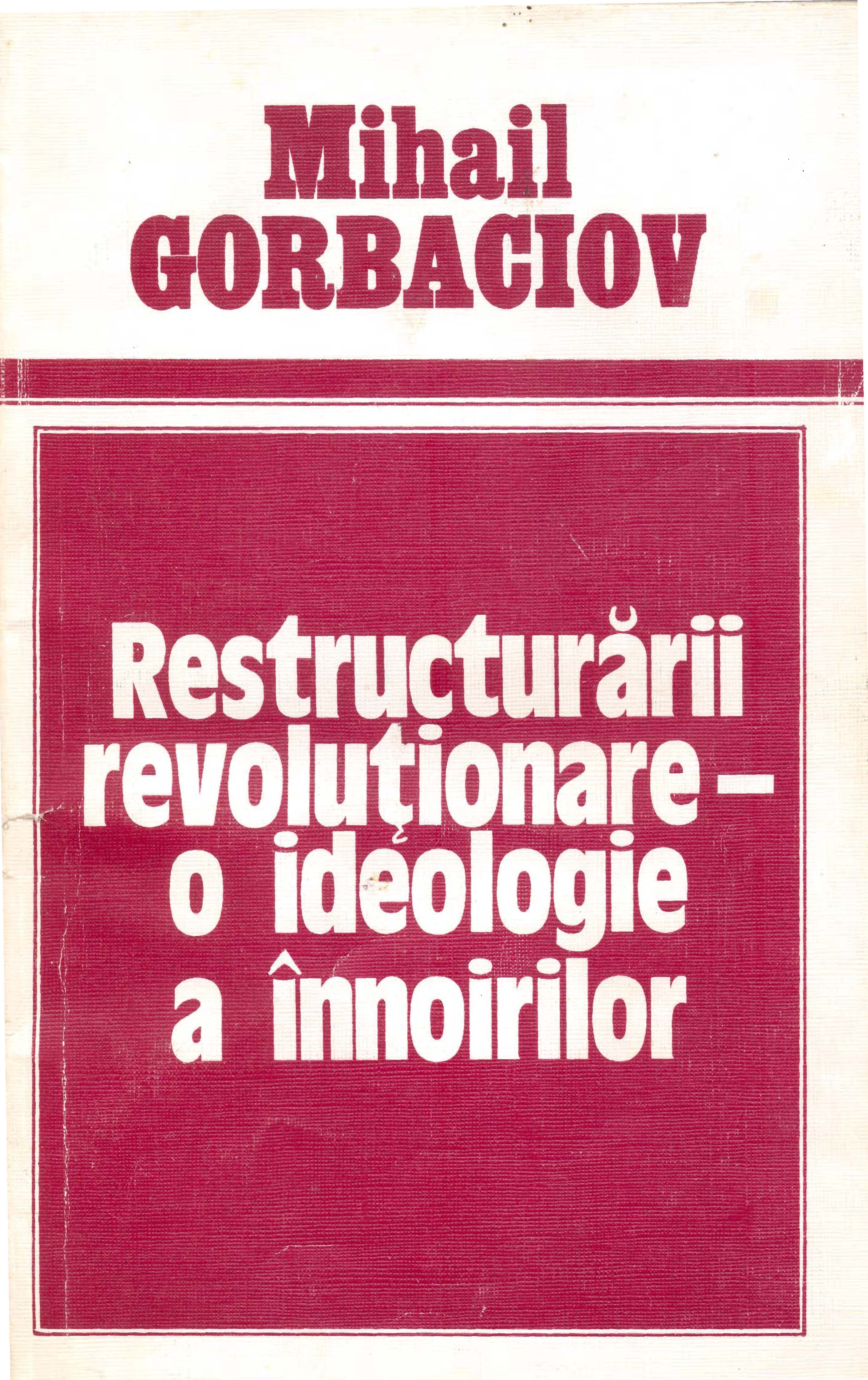 The Marian Zulean collection contains a brochure by Mikhail Gorbachev that summarises the main lines of the vision of the new Soviet leadership regarding the policies of glasnost and perestroika. The title of this little book in Romanian is Restructurări revoluționare: O ideologie a înnoirilor (the English edition is entitled The ideology of renewal for revolutionary restructuring) and it was published in 1988 by the Novosti Press Agency. Its presence on the market of publications in Romania was mediated by the International Trade Fair for Consumer Goods (TIBCO), an event held annually in Romania during the communist period, at which the USSR had a prominent stand.

The document, which is preserved in good condition in the Marian Zulean collection, gives a Romanian translation of the speech delivered by the general secretary of the Central Committee of the Communist Party of the Soviet Union at its plenary meeting on 18 February 1988. Of this event, Mikhail Gorbachev says: “Our plenary is taking place in a period of responsibility for restructuring. The democratisation of social life and radical economic reform demand from the party a clear perspective on actions” (Gorbaciov 1988, 3).

A first observation that can easily be made after reading this document concerns the abundance of references to the key concepts of Gorbachev’s policy, perestroika and glasnost. They are mentioned dozens of times in the sixty-two pages of the document, but not in the original Russian forms in which they enjoyed an international career, including in English, but translated into Romanian as “restructurare/reconstrucţie” and “transparenţă”. On the basis of these key concepts of Gorbachevism, the brochure makes many suggestions for actions that obviously undermined the strictest rules of communism. Here, for example, is a single quotation in which the idea of egalitarianism is undermined, from the podium of the greatest communist party in the world and from the mouth of its supreme leader: “In general, comrades, we must deal thoroughly with the problem of eradicating egalitarian approaches. This one of the most important social-economic and ideological problems. Egalitarianism, in its essence, exercises a destructive influence not only over the economy, but also over morality over people’s whole way of thinking and acting. It diminishes the prestige of conscientious and creative work, weakens discipline, stifles interest in increasing qualification and the spirit of emulation, of competition in work” (Gorbaciov 1988, 34).

In Marian Zulean’s assessment: “This brochure authored by Mikhail Gorbachev was a precious book at the time.” It’s value came from the discrepancy between the ideas promoted by means of it and those that characterised official discourses in Romania. “While the URSS was becoming more open and had a discourse that was less and less in contradiction to the ideas of the West, in Romania, it was exactly the opposite. They were becoming more open; we were becoming more closed. You could try to read from this booklet in public, but it was safer to think well a few times before doing so. There were a lot of risky pages in it.” In other words, in the conditions of cultural isolation in which Romania found itself at the end of the 1980s, a brochure like this was one of the few sources of exposure to alternative ideas and a precious help to those who wanted to emancipate themselves from the dogmatic constraints in Romania and to be able to think critically and freely.