Declaration on the Name and Status of the Croatian Literary Language, 1967. Typescript 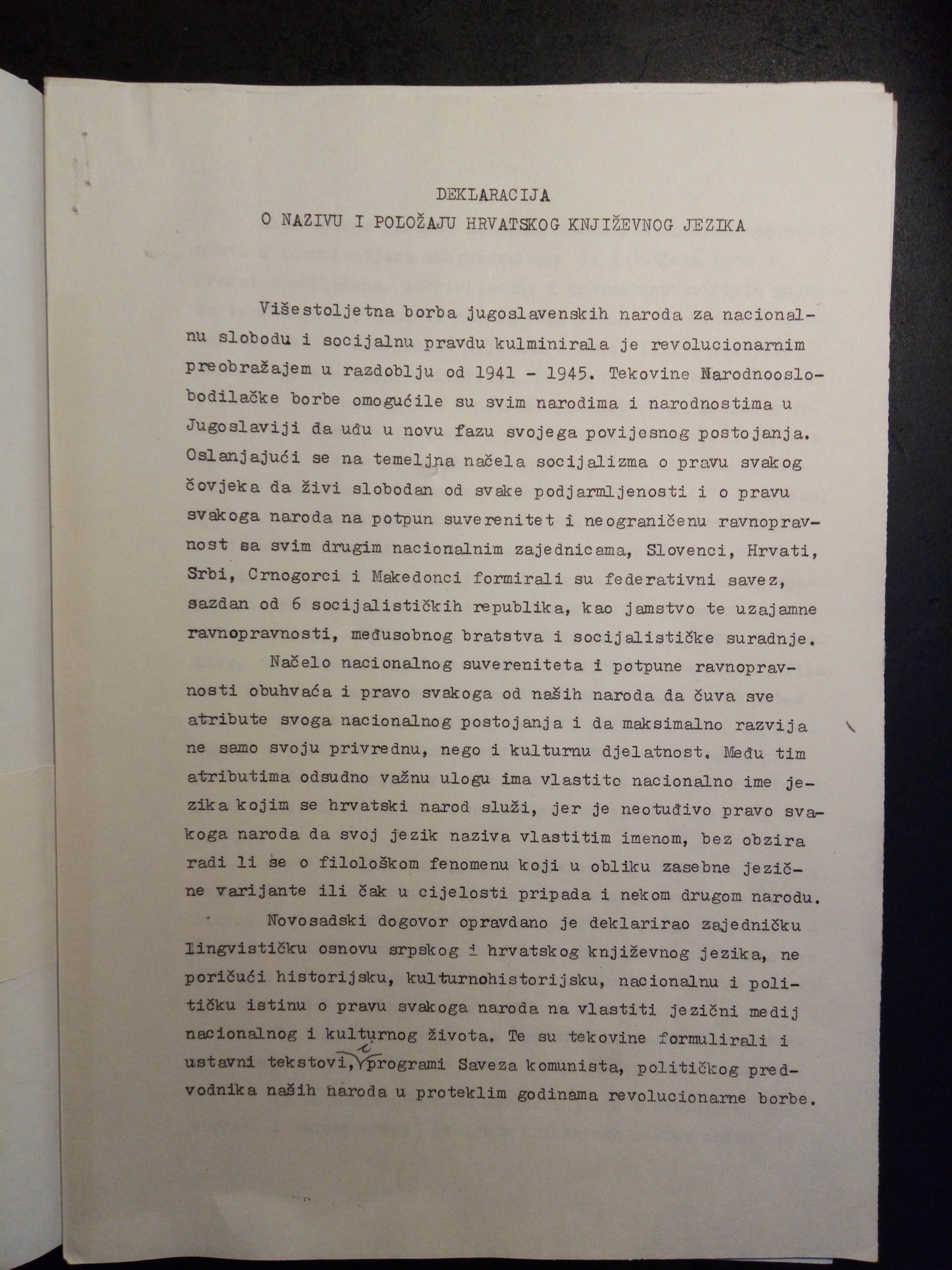 The Declaration on the Name and Status of the Croatian Literary Language was proclaimed by Croatian linguists published in the weekly Telegram on March 17, 1967, with the signatures of eighteen Croatian scholarly and cultural institutions. Croatian linguists and writers gathered around Matica hrvatska and the Association of Writers of Croatia were dissatisfied with published dictionaries and orthographies in which the language, according to the Novi Sad Agreement (1954), was called Serbo-Croatian. In late 1966 and early 1967, they had decided to write an amendment to the new Constitution which was being prepared in the late 1960s. They secretly prepared a text about the name and status of the language that was officially used in the Socialist Republic of Croatia (SRH) as part of the then Socialist Federal Republic of Yugoslavia (SFRY). The text of the Declaration was drafted in Matica hrvatska's premises by a group of academics, literary and cultural workers (Miroslav Brandt, Dalibor Brozović, Radoslav Katičić, Tomislav Ladan, Slavko Mihalić, Slavko Pavešić, Vlatko Pavletić). The Steering Committee of Matica hrvatska approved the content of the Declaration on March 13, 1967, and sent it to other Croatian cultural and academic institutions. In the next few days, the Declaration was signed by a total of eighteen Croatian academic and cultural institutions which directly dealt with the Croatian language, and by a significant number of prominent intellectuals.

The publication of the Declaration was not only a cultural but also a political affair. It had additional weight because of Miroslav Krleža, probably the most prominent left-wing intellectual not only in Croatia but all of Yugoslavia, was one of the intellectuals who signed the document. Despite the fact that the writers of the Declaration were cautious in attempting to avoid any boundaries set by the League of Communists (they used the usual communist phraseology and the style of "self-managing socialism" and the Yugoslav slogan of "fraternity and unity"), the publication of the Declaration triggered strong political reactions and set the repressive apparatus in motion. The Croatian language was a litmus test through which the overall economic, political and cultural subordination of Croatia within Yugoslavia was revealed (Kovačec 2017), and the appearance of the Declaration is considered the practical beginning of the Croatian national movement – the Croatian Spring.

The Matica hrvatska Collection at the Croatian State Archives contains the original document of the Declaration with accompanying materials (the manuscript of the Declaration, multiple typescript versions with and without signatures and stamps, Dalibor Brozović's telegrams, letters of the signatory institutions of the Declaration that give their support to its contents).