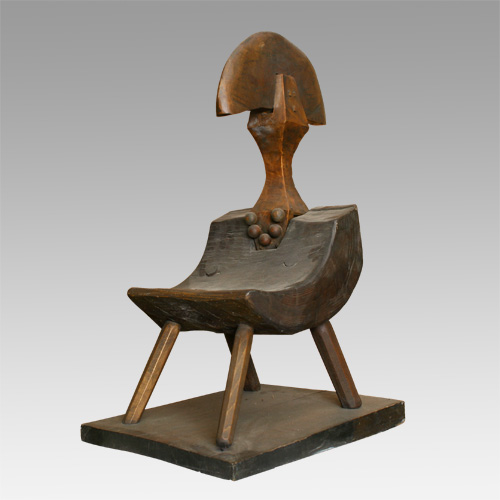 The point of departure of the sculptures of Géza Samu is often an abandoned object of rural origins, which he then reinterprets with sculptural means. Grandma Tells a Tale, a wooden sculpture, is also built around the form of a traditional piece of peasant furniture, a milking stool. This is then augmented with simple, playfully assembled carved forms, thus becoming anthropomorphic and evoking the figure of the grandmother in an emblematic way. The assembly of the elements, which are made out of different types of wood, rewrites the theme in a surprising way, moving away both from folk woodcarving traditions and sculptural conventions and elevating the composition into a dreamy state. The sculpture seems to be traditionalist and experimental at the same time.