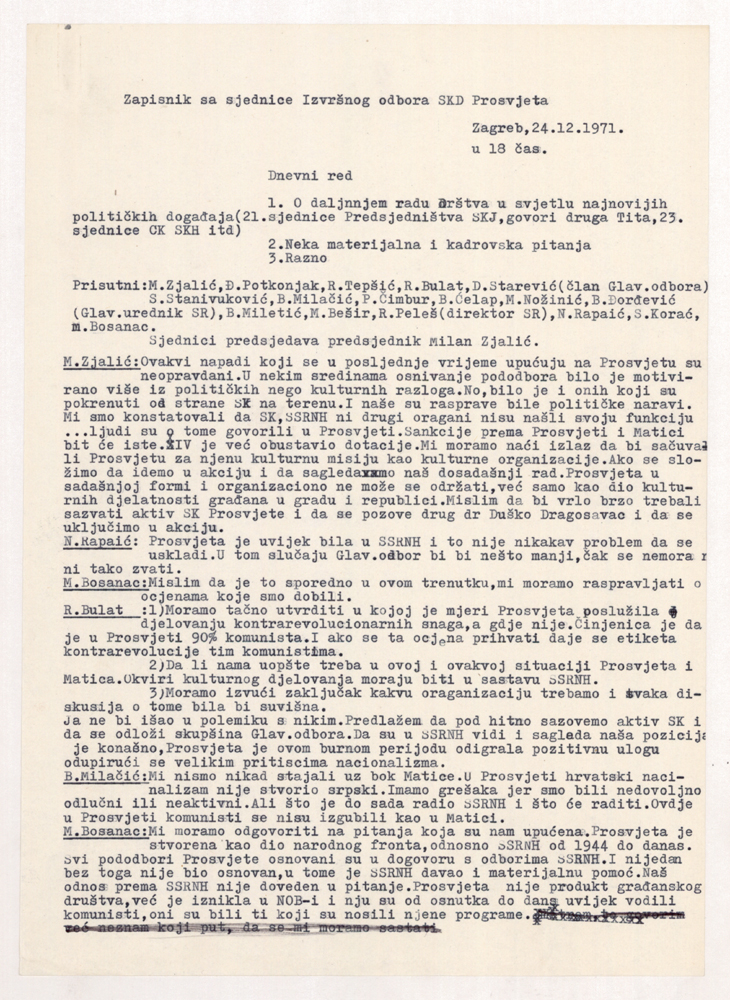 The documents present the continuing tendency of Prosvjeta’s leadership to expand Serbian influence in society and insure equality with the Croats, but they also reflect an attempt to justify this tendency, denying any oppositional activity by the Association (so-called counter-revolutionary activity) and rejecting comparisons with Matica hrvatska. The Conclusions of the Executive Committee and the Commission on Conclusions were in fact the working agenda the SCA Prosvjeta i.e., a list of priorities: reviving passive subcommittees and establishing new ones, launching a weekly magazine to cover cultural and social issues Srpska riječ, implementation  of a scholarship and research work plan, restoring the museum of Serbs in Croatia, activation of the Documentation Department  under the Prosvjeta SCA Main Comittee, the Association's active participation in deliberations on amendments to the Constitution of the SRC and the  proposal for constitutional and legal regulation of the status of Serbs in Croatia (equality of languages and scripts in all segments of society, education of Serbian children in special school programs), the establishment of a roughly a dozen commissions with the Main Comittee, and enhanced  funding. A change in the Association's name was also proposed: to Prosvjeta – Serbian Union of Croatia, also the convening of the Second Congress of Serbs in Croatia and re-establishment of a Serbian caucus which was supposed to have been decided at the next, twelfth, annual assembly, which, however, was never held because the association’s  further work was halted.