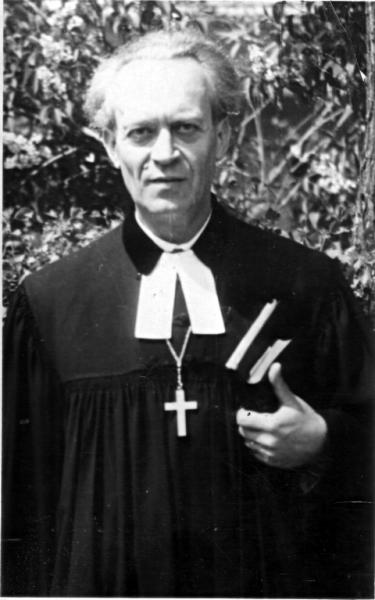 Lajos Ordass (originally Wolf) was a Hungarian Lutheran bishop. He was born in 1901, in Torzsa. He studied theology in Budapest, Sopron, and Wittenberg. He became a clergyman in 1924. Between 1931 and 1941, he was a pastor in Cegléd, and from 1941 to 1945, he was a priest in Kelenföld (Budapest). On 19 March 1944, he changed his name from Wolf to Ordass as a protest against the occupation of Hungary by Germany. In September 1945, the Lutheran church district of Bánya elected him to serve as their pastor. Three years later, the Economic Police of the State Protection Authority made a perquisition in his home. He was arrested and interrogated, but later he was released. On 8 September 1948, he was arrested again, and on 1 October he was condemned to two years prison for allegedly having “speculated with foreign currency”. The political leadership thought that Ordass was the main obstacle to a forthcoming “agreement” between the state and the Lutheran Church. The bishop did not want to resign from his office because he had been elected by the people of the Church, and he thought that he had never abused their confidence and would not do so even if under threat. However, he lost his office because of the ecclesiastical special disciplinary court, which had been threatened by the secret police, so it removed him from his office in an unlawful procedure just two months before his release (May 1950). He lived a life of withdrawal from public affairs until 1956, when his rehabilitation was finished in early October thanks to the meetings of the Central Committee of World Council of Churches and the State Office for Ecclesiastical Affairs, which had taken place in August 1956 at Galyatető. He returned to his office to lead the Southern Lutheran Church District (which had been created in the meantime) on 3 November 1956. He was a bishop until June 1958, when the Church forced him to retire. He never returned to the leadership of the Lutheran Church.

Ordass was a model bishop, rather than an epoch-making Church leader. He could not be the epoch-making Church figure he might have been because the communist dictatorship only allowed him to be active as a bishop for short, fragmented periods (1945–1948 and 1956–1958). In the last 28 years of his life, Ordass was either in prison (1948–50) or in the background (1950–1956 and 1958–1978), living as a retiree, isolated from active ecclesiastical service. In this period of some 30 years, Ordass created an interesting situation of conflict: the leaders of the Church and the party state were equally worried about the fact that he was a member of the Presidency of the Lutheran World Federation for 12 years. He couldn’t take part in the sessions, with the exception of two great assemblies, when he was elected to the Presidency of the Lutheran world organization.