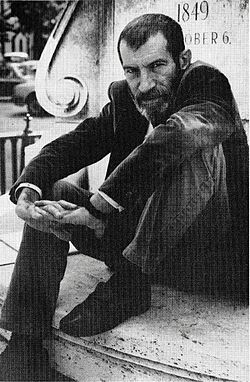 György Petri (1943–2000) was a poet, translator, and founding member of the Foundation for Aiding the Poor (SZETA) and Beszélő, the prominent Hungarian samizdat journal.

He was a lone child and had a difficult childhood. His father, a traveling agent, died quite early; his mother following WWII worked as an accountant. As a young boy he was a regular churchgoer and brought up in the traditional Catholic spirit. After secondary school, from 1966 he started his university studies at the ELTE Budapest Faculty of Philosophy, studying Hungarian language and literature. His first book of poems published in 1971, Magyarázatok M. számára (Explanations for M.), was a fairly successful one. Three years later he managed to publish another success, with the title Körülírt zuhanás (Euphemisms on a Fall). But then from 1975 to 1988 he became a banned author for a long time in Hungary, and thus he managed to publish his writings only in samizdat or tamizdat papers in the West. His first samizdat book of poetry entitled Örökhétfő (Everlasting Mondays) was published in 1981; its popular masterpieces are still quoted as a memento of an age (the late Kádár era) and an attitude (revolt and desperate desire for liberty). He lived an uttermost self-destructive lifestyle, with the passion of love, alcohol, straightforwardness, and an intransigent moral resistance, and left behind a uniquely strong and sarcastic political poetry.

He was one of the founding members of SZETA (Foundation for Aiding the Poor), the founding editor of Beszélő (Speaker), the prominent samizdat periodical in Hungary, 1981–1989, and remained an outstanding figure of the Hungarian democratic opposition.