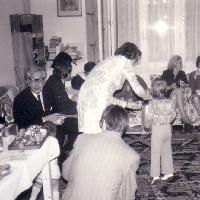 The base community named Bokor was established by Roman Catholic people and was very active in the 1970s and 1980s, functioning according to the guidelines given by Pious monk György Bulányi. Bokor members were considered a dangerous by the communist regime, which regarded them as a suspicious group because they sought to live their religion as part of their everyday lives.