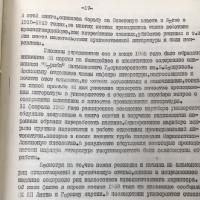 "Gilotyna" magazine
“Gilotyna” was one of the first independent youth magazines in Polish People’s Republic. Initially, since 1980, it functioned as a satiric wall newspaper, edited by pupils from the 1st High School in Gdansk. After a year, it started to be published as a newspaper - independently copied and disseminated. It was edited by Janusz Waluszko, Krzysztof Skiba, Wojciech Lipka, Michał Skakuj i Maciej Kosycarz. In 1983 Waluszko and Skiba became one of the co-founders of the Alternative Society Movement – the first post-war anarchist organisation in Poland, and the most important magazine in this environment was “Homek” (the title is a diminutive of the Latin homo – it was supposed to emphasize their perspective of a single man standing against the big history and politics). The preceding “Gilotyna” did not have a visibly anarchistic character, however it included a lot of radically political content. It was an independent, bottom-up, youth initiative of the pupils who sympathized with the democratic opposition, yet did not identified with any particular group.
Poznan Anarchist Library in Rozbrat owns both the first issues of “Gilotyna” and “Homek”, as well as many other underground magazines on politics and culture.
Skaityti visą
GDR from below - Punk Album

'DDR von unten' (GDR from below) was the first punk album produced in the GDR and brought clandestinely to West Berlin. This record is one of the few albums which is recognized as belonging to the underground music scene in the GDR.

The album was recorded near Dresden in the home studio of Andeck Baumgärtel using improvised equipment and techniques. The limited edition was a success in West Germany, but never released in the GDR. Nevertheless, it spread illegally in the GDR via cassette.

The impulse for creating the compilation album can be traced to Dimitri Hegemann, from the (West) Berlin city periodical 'tip', who met one of the bands which recorded for the album, 'Rosa Extra', in East Berlin in the early 1980s. Other bands such as 'Zwitschermaschine' (Twitter machine) and 'Schleim-Keim' (Slime Germ) were added to the album's list of contributors. Since members of 'Rosa Extra' were trying to acquire official classification as professional musicians at the time of recording, they had to surrender the masters of their tracks to the Ministry for State Security. Therefore, only 'Zwitschermaschine' and 'Schleim-Keim' - albeit using aliases - can be heard on the final album.

Although the Ministry for State Security had been aware of the album’s production for several years, repressive measures were only undertaken as the project was completed. The members of 'Schleim-Keim' were placed under Stasi surveillance after the recording was released and eventually arrested. While they were released shortly thereafter, their lyrics were sharply criticized as posing a fundamental threat to state order.

Dimitri Hegemann was banned from entering the GDR and was forbidden from transiting to West Germany from West Berlin via the GDR.
Skaityti visą 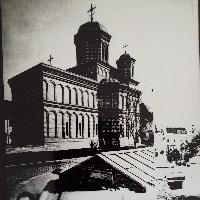 This photograph from the Ștefan Gane Collection is a testimony to the Ceaușescu regime's policy of transforming the urban landscape and destroying everything that was opposed to its vision. An example of this is the almost total destruction in 1985 of the Mihai Vodă Monastery, of which only the church and the bell tower were preserved and moved to another site down an incline.

The church of the former Mihai Vodă Monastery is an emblem of premodern Bucharest and one of the oldest buildings that have been preserved in Bucharest. Built in 1594, over time it had several destinations, including Princely Residence, Military Hospital, Medical School, and headquarters of the State Archives. It was founded by one of the most important rulers in the Romanians' national history: Mihai Viteazul (Michael the Brave). He was the ruler of Wallachia between 1593 and 1601 and the only leader of one of the premodern states existing in the modern perimeter of modern Romania that unified, for the period 1600–1601, a territory roughly equal to that of today's Romania. Thus Mihai Viteazul was considered from the nineteenth century an important figure in national history. Under the communist regime, historiography of gave Mihai Viteazul a much more important place in national history than he had had before. He was named as the prefigurer of the so-called "Union of 1918". This historical event consisted of the annexation of the historical regions of Austro-Hungary, inhabited mostly by Romanians to the so-called Old Kingdom of Romania and was materialised in the Peace Treaties of Saint-Germain (1919) and Trianon (1920). This image of Mihai Viteazul as anticipator of the “Union of 1918” was strongly promoted under the Ceauşescu regime not only through textbooks and historical works, but also through the historical film Mihai Viteazul, made in 1970.

Despite the overwhelming importance the communist regime granted to Mihai Viteazul, the monastery complex he founded became the most famous victim of the total demolition of Bucharest. The site where it was located, a high position in the urban landscape of the capital, was assigned by the communist authorities to the building that is now home to the Romanian Parliament. In 1985 the monastery was demolished, but not entirely. At the last moment, the church and the bell tower were moved, despite the initial plan that everything should be destroyed. The church was moved to the base of the hill, where it was subsequently hidden by communist buildings. The church was originally located on Mihai Vodă Hill, on the former Archives Street no. 2, and was moved to Sapienţei Street no. 4, where it still stands. This photograph was taken clandestinely by Ștefan Gane a few months before the edifice was moved, and went with him to France in 1985 when he emigrated. The photo in question, which is today in the Ștefan Gane collection, is in the original, 10x15 cm, printed on black and white paper. Today it is an important historical source for understanding and writing a part of Romania's recent history in connection with the project of destruction of the national patrimony practised by the communist regime between 1977 and 1989. 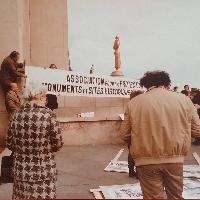 Gane, Ștefan. Protest against the demolition of historic monuments in Romania, Paris, 1985. Photo

This photo reflects the way in which the Romanian exile organised itself and acted to present in the West the urban systematisation project of the Ceaușescu regime, which involved the demolition, mutilation, or destruction of the national heritage. The photo captures the moment when the International Association for the Protection of Monuments and Historic Sites in Romania was set up in Paris in 1985. On that occasion, the Association organised a protest on the streets of Paris, during which it displayed a series of placards with texts about Communist Romania, accompanied by photographs of historic monuments destroyed by the Communists or about to be demolished or moved. These details are captured in the photograph in question, which can be found in the Ștefan Gane collection in the original, 10x15 cm, printed on colour paper. The purpose of the Association was to draw the attention of political decision-makers and international public opinion to the project of the communist regime in Romania for the demolition of the architectural and urban heritage. The actions undertaken by the Association focused in particular on drawing media attention to the demolition of the city centre of Bucharest, which was planned by the authorities of the totalitarian regime so that they could reconstruct it according to the communist architectural vision.