KARTA Centre Foundation
The KARTA community was founded in January 1982 in Warsaw during the martial law in Poland. Their first initiative was an illegal underground newspaper, named „Karta”, focusing on political commentaries (19 issues). In 1987 the Karta editorial team initiated the Eastern Archive - a social movement documenting the concealed and distorted "Eastern" past. Since 1990 KARTA acts legally – two legal entities established then were merged in 1996 into one KARTA Centre Foundation.

Today KARTA Centre Foundation is a book and magazine publisher (among other titles „Karta” quarterly), organizes exhibitions and educational events, like „History at hand” competition for youngsters. KARTA runs the biggest private archive in Poland, which covers the history of Poland and the whole region in the 20th century. Documentary archive consists of a significant collection of underground newspapers and books, but also "Solidarity" movement documents can be found there (officially recognized as part of UNESCO heritage). The huge photographic archive (more than 290 000 items) is easily searchable by its dedicated website, while oral history archive, co-owned with the History Meeting House in Warsaw, is the biggest archive in Poland of such type. As an NGO, KARTA can receive public funds, but does not have any stable budget. 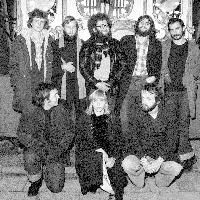 The Berlin Song Theatre group “Karls Enkel” existed with different line-ups from 1976 to 1986. Even though they received many awards, they remained critical of the existing conditions. The officials also couldn’t decide on a common attitude towards “Karls Enkel”. While in some parts their performances were seen as a provocation, the group was seen as an artistic symbol of hope in other places. Its most prominent members were Hans-Eckart Wenzel and Stefen Mensching who also performed as clown duo and were extremely successful with their program “Letztes aus der DaDaEr” in the mid-1980s. Both worked as solo-artist after 1990.
The Archive contains programmes, video-recordings, and pictures of performances of “Karls Enkel” as well as interviews with members of the group.

The Keston Institute was initially founded as the Center for the Study of Religion and Communism with a mission to disseminate informed information on the conditions of religious liberty in communist countries. After being renamed the Keston Institute in 1971, the organization’s operation included the acquisition and maintenance of an archive.